The beautiful St Paul’s in the Jewellery Quarter presented us with one of our biggest live stream challenges: An atmospheric Music by Candlelight performance by Ex Cathedra, complete with low light, tight budget and limited post production time, to be broadcast on Facebook Live a few days before Christmas. 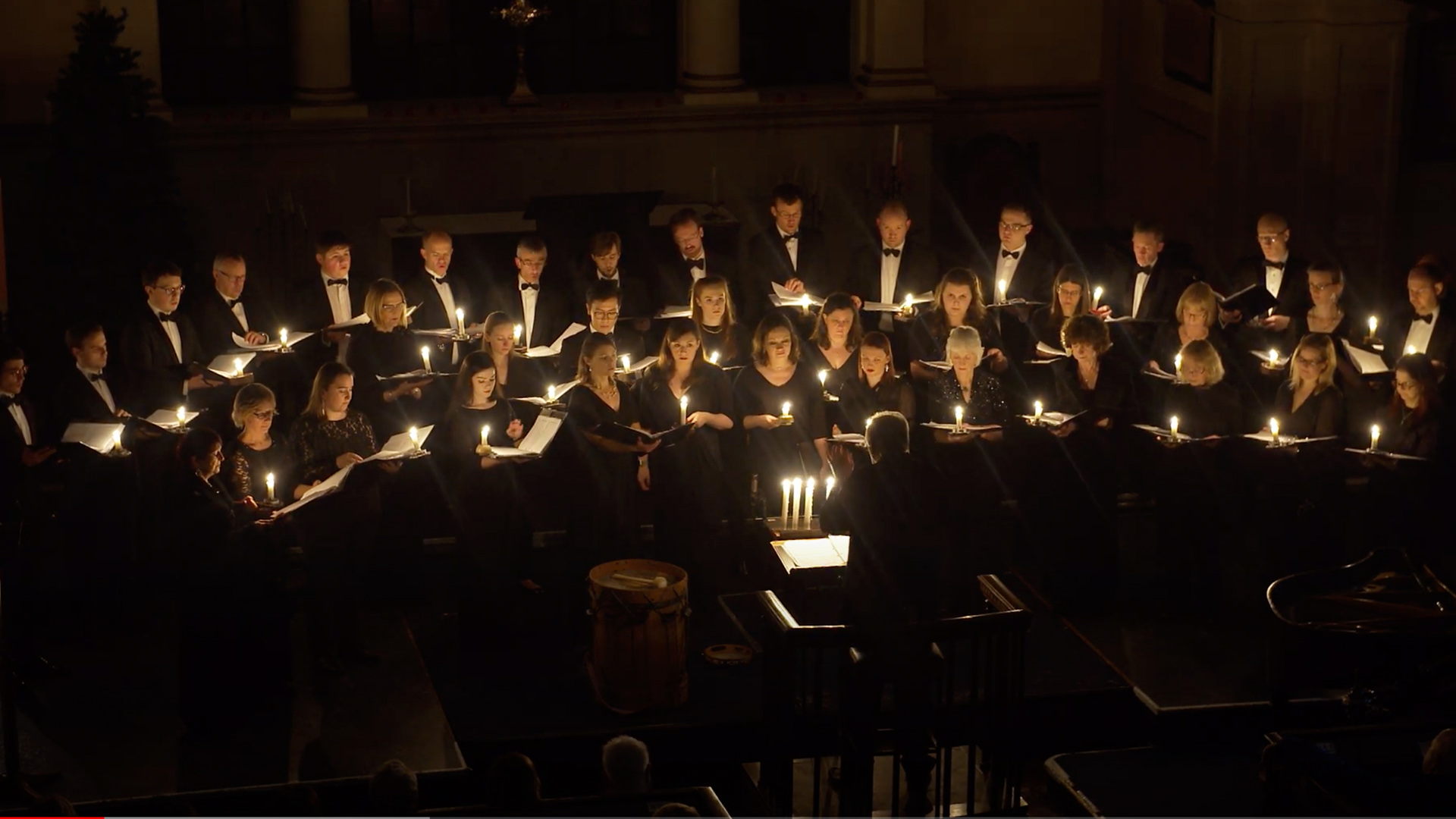 The performance took place on Friday 20th December and the film was to be broadcast as live via Facebook the following day. The biggest challenge for us was the lack of light. Ex Cathedra were keen for us to use as little light as possible so as not to disrupt the experience for the live audience. We knew that there was only one camera that lends itself to this kind of low light work: the Sony A7S. Unfortunately the A7S isn’t exactly designed for two hour plus multi camera live shoots.

All in the Planning + A Bit of Good Luck!

The week of the shoot Sony brought out the fantastic FX9! And our director of photography became one of the first in the UK to land one. After hunting high and low we were able to find three matching FX9s ready to hire, thanks to Visual Impact Northern and Shift 4 in Manchester.

We watched a couple of pre-release videos from Philip Bloom and researched its low light capabilities which convinced us that the full body FX9, with its new S-Cinetone colour profile, dual native ISO and its ability to output footage via an SDI, was the way to go. But to be really sure, we carried out a camera test in the same venue two days before filming, during an earlier performance.

Lighting problems solved, and onto the next challenge. With less than 24 hours between filming and going live we knew editing had to be minimal. Live mixing enabled us to produce a 90 minute film, ready to go out the following night. We created all captions and credits prior to the event and used the one day editing time to tidy up the live mix, cut out the sections of the performance that couldn’t be broadcast (copyright reasons) and export.

Effective Use of Tech and Budget

Normally on a shoot this size we would use studio cameras hooked up to a rack for Iris control and colour balance together with a full vision mixing gallery. Our low budget and light issues sent us in another direction but this threw up another problem. Most vision mixers won’t live mix progressive footage and the FX9 only outputs 1080p. We got around this by using the versatile Roland V-600 UHD Multi-Format Video Switcher, designed more for the corporate events sector. It handled the 1080p footage via its six inputs (albeit HDMI) extremely well.

We also made sure to budget for a highly experienced vision mixer and gallery PA, ensuring the live mix would be as good as it could be, hitting all the cues necessary and requiring minimal post.

The Sony FX9 allowed us to create a film with a high end feel on a relatively low budget. High ISO shooting usually means grainy footage. The cameras were generally operating at ISO 64K and the results were incredible. No grain or noise was visible in the final film. Using only natural lighting helped us to achieve an incredibly atmospheric, cinematic film that really captured the spirit of the candlelight concert. A lot of this would have been lost had we bought in big lighting rigs – we knew we didn’t want the film to look like Songs of Praise! The tight timeframe meant no grade so we shot in S-Cinetone, a new colour profile for the FX9 which helped to achieve the cinematic look and feel of the finished film.

The film was broadcast as live on Facebook and achieved high viewing figures and reach. Our client was incredibly happy with the end results both in terms of the look and feel of the film and the viewing figures:

“It was a joy to work with Method in Motion on our Christmas Music by Candlelight film. It was the first time we had worked together and it was a project with some inherent challenges – particularly around the lighting levels – but Matt and the team were very supportive and keen to find solutions that worked with the budget we had available. We are extremely pleased with the quality of the final film, had 245k engagements on Facebook, 122k views and nearly 28k 10-second views, and lots of encouraging feedback from viewers. I hope we have the opportunity to do something together again before too long.” Peter Trethewey, General Manager, Ex Cathedra

© 2021 Method In Motion. All Rights Reserved. Website by Big Cat